Why All the Division?

Home » Blog » Why All the Division? 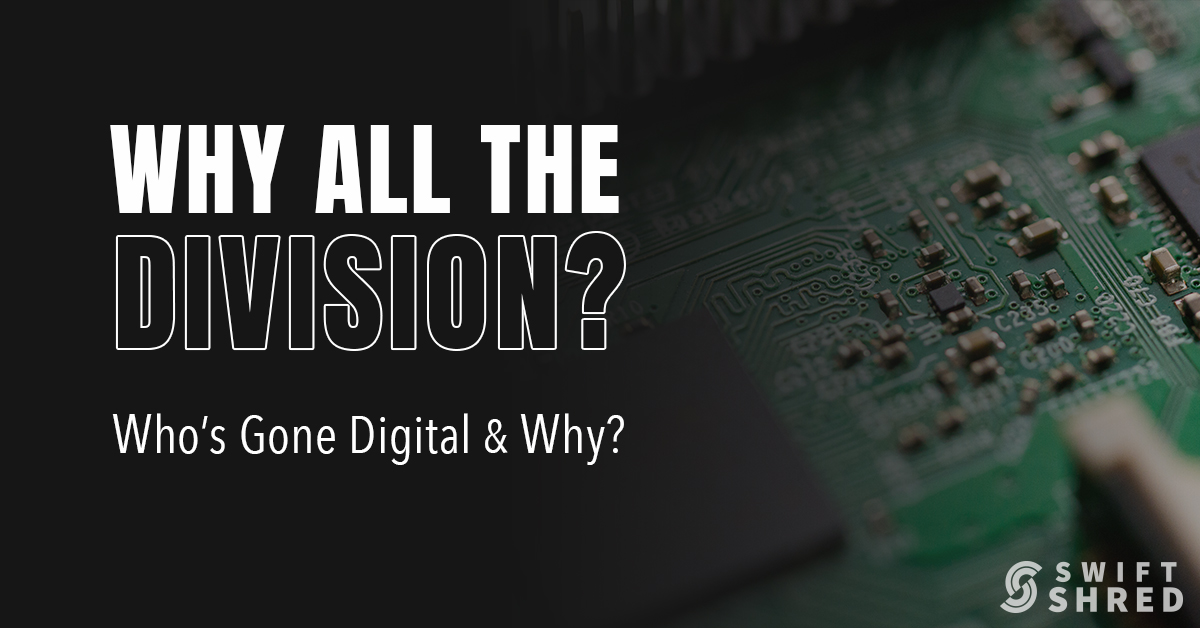 Who’s Gone Digital and Why?

Digitalization is the uniquely tailored, ingenious combination of an organization’s digital assets, digital usage and digital workforce. Think of these distinctions as the “What?”, “How?”, “Who?” of IIM.
What? – Digital Assets
Digital Assets are what organizations spend on computers, software, and telecom equipment. These assets also include the interconnectivity of IoT Devices and, of course, overall data storage.
How? – Digital Usage
Digital Usage is how digital payments, digital marketing, social technologies, and workflow software are used to manage back office operations and customer relations.
Who? – Digital Workforce
Digital Workforce can be broken down by title or by tasks associated with positions, such as Database Administrator, Social Media Manager, UX/UI Designer, etc.

Why have some industry sectors gone digital sooner than others? It is clear that there are many operational benefits of digitalization, but what ultimately drives this decision? According to the McKinsey Global Institute (MGI), there are four factors that determine the likelihood of a commercial, public or social enterprise digitizing:

MGI created the chart below which breaks down the level of Digitization by Industry Sector in the United States. It was put together by compiling 27 indicators that combine the ‘What?’ ‘How?’ and ‘Who?’ of Digitalization to show how these industries relate to each other in terms of technological adoption. This chart was created in 2015, so it is likely that there has been more adoption across many industries than what is presented here, but it is still helpful. 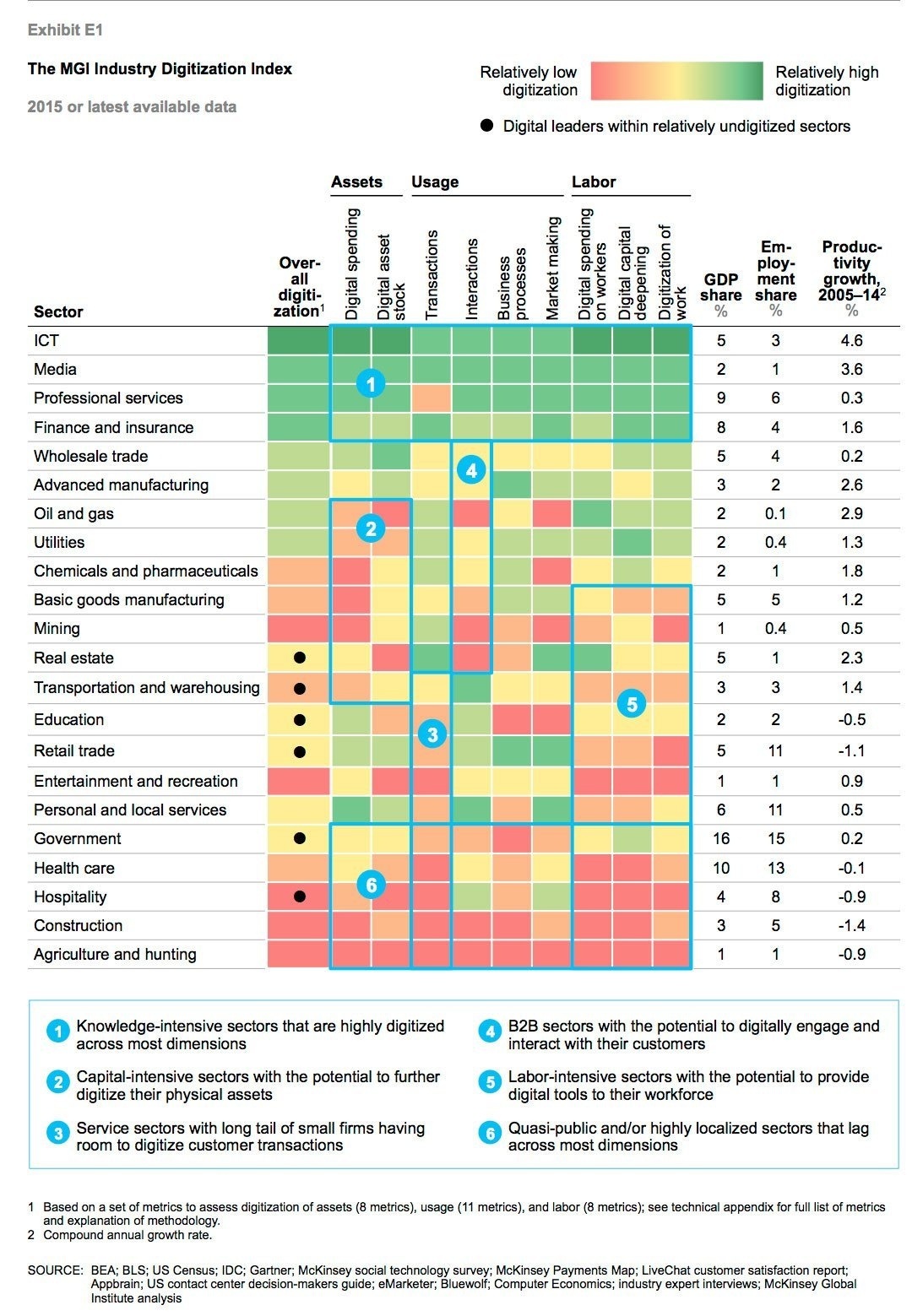 The term “Digital Divide” was first coined 20 years ago to point out the gap between different segments of society’s interaction with technology. The divide was based on socioeconomic and demographic conditions, but it can also be used now in reference to the contrasting levels of Digitalization among different industries and institutions. In most industries there is an astonishing difference in the level of Digitalization between leading firms and average firms.

Even among the companies that have taken the all-important first step of Digitalizing their data and assets, only a fraction of them utilize all of the potential technological capabilities. This means that there is a Digital Divide within the ranks of the digitalized. Automating repetitive tasks and streamlining internal processes to get the most out of high-skilled workers and improving customer relations should be the objective. Ultimately all businesses are customer-driven and there are many ways that Digitalization can improve the overall customer experience and engagement through new business models.

How do the four factors of Firm Size, Complexity of Operations, Knowledge Intensity and Threat of Competition push companies to Digitize?

Here’s the answer, according to MGI:

Large firms are more likely to adopt digital tools than small firms (with the exception of small “digital natives”), in part to manage greater complexity. For a similar reason, firms with long supply chains or many establishments are also more likely to digitize. Companies with a large share of highly educated or specialized workers also tend to be more digitized since the productivity returns tend to be higher. Finally, the actual degree of competition in a sector does not seem to be a factor, but the prospect of competition is.

In other words, large organizations are more likely to Digitalize their assets retroactively, while small start-ups are likely to build their business models digitally from the beginning. Mid-sized organizations are less likely to adopt digital processes. Operations with complex moving parts are also more likely to go digital in order to improve their internal operations. The benefits to improving efficiency for businesses with highly educated, specialized employees are even greater than those with less skilled, lower paid laborers (think billable hours), so they are pushed toward Digitalization to take advantage of their workforce.

The final push to Digitalization is also the greatest motivator; FEAR. The fear that a leaner, younger, more agile and more advanced competitor will emerge and crush you. This fear is not unfounded. In fact, businesses that rely on a single revenue stream or that play an intermediary role are at the greatest risk in the Digital Age because it is the nature of digital disruptors to give things away to consumers and to bypass middlemen. Just think about how music streaming services have changed the recording industry, or how travel booking applications have reinvented the travel industry. These are just two examples, but you can look at how digital disruptors have come into almost every conceivable industry and destroyed value by giving things away to the consumer, seemingly for free. This disruption forces modern companies to create more sustainable business models by experimenting with alternate sources of revenue. 1 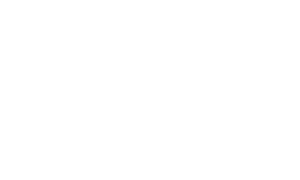